Weaving a Webb of Words to Win the All-Ireland Scrabble Championships.

With 24 players in the All-Ireland Division the stage was set for a great weekend, with several previous All Ireland Champions in attendance … Chris Broderick (1995), Eileen Meghen (1997), Catherine Costello (2001) & Feargal Weatherhead (2011 & 12). It went all the way down to the wire with Ronan Webb clinching victory by the tightest of margins – an incorrect word played by his opponent (Gillian) in the dying moments of the final game helped him along. The top 7 places were separated by a difference of only 2 wins, which shows how close the event was.

With a number of new players, and people returning who hadn’t played for years, the B division had 13 players on Saturday and 12 on Sunday. There were several newcomers, who had never used clocks or played at a tournament before.

Again this was a really tight affair with the top 4 places separated by only 2 wins. It just shows that fighting for every point of your spread (even when losing) is so important. Win Big, Lose Small! There were 5 prizes given out in division B as follows:

The Novice Event was the perfect way for newcomers to dip their toe into the Scrabble tournament scene, and 6 players played in a mini 4-game event on Sunday afternoon, It also gave them the opportunity to see how an event is run, and meet other players. Local lady Vonnie (Yvonne) O’Connor won the Novice event, with 3 out of 4 wins.

And it wasn’t just the Scrabble that kept the players entertained over the weekend. A novel idea to have a jigsaw for anyone who found themselves on a bye, or finished their game early, proved a success, and a fun table quiz on Saturday evening was enjoyed by many, with Liam Donnelly & Bronagh Kenny proving to be our Eggheads.

The food, drink, hospitality, rooms and everything else was fab in the hotel, as usual. Special thanks to Kate Copeland on computer input, who kept everything running well during the weekend.

Here’s a link to all the stats, and below are photos from the event.

no images were found

Selection of Photos From Ger Hore

no images were found 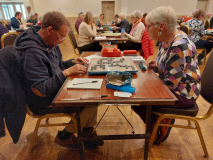 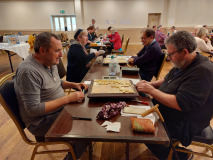 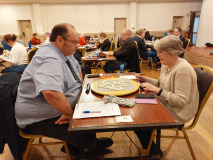